#REJECTEDBOOKS.COM: A Call For Your #Rejected #Books (Sort Of) 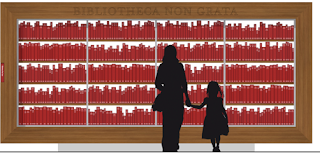 Got an email from some enterprising young Swedish fellows, announcing a need for YOUR rejected book titles:


Established as well as unestablished authors from across the world are invited to contribute to the art project Bibliotheca Non Grata — an imaginary library of rejected and thus non-existent literature — with titles of their own literary works that have been rejected by a publishing house or an institution and thus have not been published.

Titles can be submitted on the project's website, where you can also find more information about the art project.  Find out more on facebook.

Bibliotheca Non Grata is a public art project by artist Måns Wrange and architect Igor Isaksson, commissioned by the city of Umeå in Sweden, in memory of journalist, activist and author, Stieg Larsson’s work for democracy and free speech as well as against discrimination and racism. The artwork Bibliotheca Non Grata will be placed in Umeå city library in the newly constructed and the Kasper Salin architecture prize awarded cultural centre Väven.

Posted by Writer, Rejected at 7:58 AM No comments: