Why I Think You Should Not Purchase #GoSetAWatchman 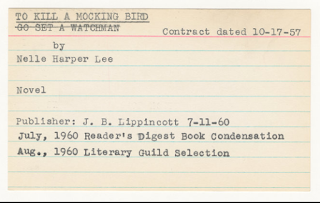 There are several reasons why I am not going to purchase and read Go Set A Watchman (GSAW) by Nell Harper Lee. One of those reasons is the crooked agents she's had since her beloved agent, Maurice Crain, died in 1970.   Crain was the one who edited her work, advised her, and helped her develop To Kill A Mockingbird.

Harper Lee really got the shaft at the agency McIntosh & Otis, particularly by Sam Pinkus, who made all sorts of dirty deals behind the author's back. The whole thing is detailed in Mark Seal's excellent expose at Vanity Fair, aptly titled "To Steal A Mockingbird."  This should be required reading for literary writers, students, and book authors. There should be a quiz on it at cashier counters wherever GSAW is sold.

Additionally, the article reports the following:


A friend once asked Lee if it was true that she’d never written another novel because she didn’t want to compete with herself.
“Bullshit!” she snapped.
“Why then?” the friend asked.
“Because I wouldn’t go through all the terrible publicity and the strain of what happened with Mockingbird for any amount of money.”
Asked about the volume of Mockingbird sales, she replied, “Well, it doesn’t matter, because I only make 10 percent on it.”
She rarely talked about money and never handled it. Her checks bore the account name of Harper Lee and Alice Lee, and Alice balanced her sister’s books, paid her taxes, and reviewed her contracts.

I feel you, sister Nell; promoting a book is not for the faint of heart. The New York Times reported on the history of the book:


“Go Set a Watchman” would have been Ms. Lee’s literary debut, if her editor had not rejected it. She finished the novel, which takes place 20 years after “To Kill a Mockingbird,” in the mid-1950s. But her editor, Tay Hohoff, told her to write a new version from Scout’s perspective as a young girl.

I must say, I hope no one ever discovers the skeletons of books I have in my closet, completed or not! It is clear that GSAW was a stop on the road toward writing the excellent classic To Kill a Mockingbird (TKAB).

Here are some facts:
For more, read Claire Suddath's excellent article, "What Does Harper Lee Want?" at Blomberg Business. The point here is that after Harper Lee's sister Alice died all bets were off. I think if she'd wanted to publish GSAW at any point in her career, she would have.  That it is being published now is just a bunch of agents and publishers making a bundle off of an old woman who is not able to make her wishes known.  In short, in my humble opinion it stinks of bad juju.

We live in a reality-TV time when everyone wants to know the story behind the story. Many readers will purchase GSAW just to learn about the book that Nell Harper Lee herself called, "The Parent of To Kill A Mockingbird." I don't watch Reality TV. I don't want to know how the magic trick was done. I believe it is the writer's prerogative to share or not share the behind-the-scenes of her wonderful published novel.  Of course, it's your choice whether or not you yourself purchase the book, but at least you know the shady issues surrounding its discovery and publication.
Posted by Writer, Rejected at 10:08 AM