Words from a Glass Bubble by Vanessa Gebbie 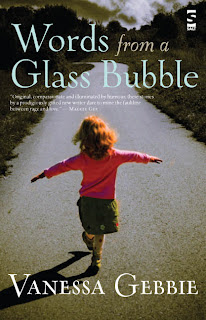 Here's a writer who found the 4-year expressway from beginning fiction to publication. Vanessa Gebbie has commented here at LROD, always with an interesting point of view.  She has some unique advice to writers about ego control. (Is that why we keep getting rejected?)
How long did it take you to write the book? I started learning about short fiction in November 2003, and had the collection accepted in January 2007. So all the pieces were written between those dates. I guess this question is really aimed at a novel project. Each story can take a few days, or a coupla years. But I did them while other work was also under way, so it’s a bit different from the novel.

What prompted your interest in it? I love short fiction. I had spent a while amassing a nice pile of rejections, but also some decent acceptances, thankfully, and figured that I had the right material for a collection of short fiction.

How long did it take to finish the first draft? I put together those pieces I thought went together well, including competition winners. And sharpened them as much as I could. Say, three months.

How many revisions did you write? None, not at this stage.

Who read your drafts? A good friend and fellow writer, Zoe King, editor of Cadenza, a small press magazine here in the UK.

How did you decide which comments were important and which you didn't need to heed? I always listen to Zoe’s advice. She chimes well with my work.

What was your overall rejection experience with this book? I sent a few stories in late 2006 to a publishing house called Salt by email when the guidelines ask for snailmail subs. Silly me;I heard nothing.
I felt very brave in early 2007, and sent the thing as a submission to a Welsh publishing house, which had been kind enough to publish one of my stories in an anthology. But I think I did it wrong again. I was very green! I sent them a list of titles with competition/publishing credits and links to verification, expecting them to be excited. They weren’t. I chased twice, but never even got a reply.

A month or so later, just to tidy the records, I emailed Salt to ask for a yes or no. Suffice it to say that they were waiting to find out whose work these stories were, as they’d liked them, but they had come adrift from the covering message. If I hadn’t contacted them, I’d have never got the collection published.

Did you already have an agent? Or did you use this project to get one? I did not have an agent, and at this stage, did not need one. I have since been lucky, and I think having this collection accepted by Salt Publishing helped to strengthen my hand as a serious writer. I am now represented by Euan Thorneycroft at A M Heath and Co.

How long did it take for you to get an agent? From starting to write fiction, four years.

Where were you when you found out the book had been bought? I got an email at home in my study.

Who was the first person you told? An old writing tutor. It seemed the right thing to do.

Has your philosophy on getting published changed? Would you do anything differently now? Yes. I think I’ve sharpened my act. If I was repeating the experience I would make sure I followed the guidelines as well as following the advice of other writers. There is a reason why things work, and why things don’t.

What's your view of the rejection experience now? I think being rejected is a necessary part of being a writer. The world isn’t easy for anyone, so why should it be for us? Learning to cope with rejection is necessary. I still find it tough, but have learned to get over it. (Sort of. Sigh).

What words of advice would you give to a writer, rejected on the journey toward getting published? Keep writing. Don’t take it personally. They have no idea who you are. If you have had helpful comments with the rejection, take them on board. Wait, and take action after a little time has passed. Your rejecters may have a point. On the other hand they may not chime with your work, and you may not agree.

It’s fine to believe in yourself, but I would suggest you learn to write before you consider yourself to be an undiscovered genius. Most people who think like that remain undiscovered.

Any other comments? Be kind to other writers. The world is full enough of people who will take pleasure in not being so.

Posted by Writer, Rejected at 8:00 AM

Nice interview...Still, honestly, I find it frustrating to read about someone who made it all happen so fast...makes me feel like I've been slogging for so long...

I understand your frustration.


When you say 'made it happen'... let's put it into context. Salt is a small independent publisher. They pay no advances. Nothing. Nada. Zilch.

For all that Salt is great to work with and extremely generous in their support of writers, for me to accept 'made it all happen', I would like that to have been a mainstream publisher, a nice advance to help pay the bills at home.

But it was the very best I could do. And sure, it is lovely to have a book out there with my name on it.


hey, there will always be writers who do things earlier than you. And many many many will get there (wherever that is) later than you. Don't forget that.

Congrats on your book. Sounds like you have your act together. I was wondering--because it sounds like you did a lot of work in a short time--whether you have a dayjob and how much time you devote to writing and the other mundane stuff--submissions, correspondence, etc.

It's always helpful to get an idea of what a successful writers's writing life is actually like. Thanks in advance :)