You Bore Me, You Spoiled Brat! 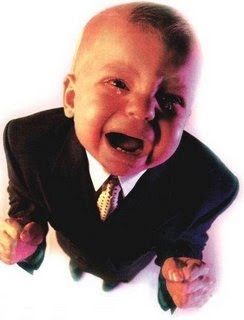 "there are other ways to make contacts besides getting an mfa...

how about making friends at a chichi artists' colony? editors who've published you? writers you've been published along side?

it must take work to have *no* friends in the lit biz, after 20 or so years. complain much wr?

your writing should usher you into the literary world on it's own merit. after all the $$$ you won, you sound like an overgrown spoiled brat. i'm sure if your defenders knew all the breaks you've had they'd think twice about championing your blog. your literary lottery winnings trump those of most people with mfa's. if you don't like where your career is at, you have only yourself to blame."

Actually, I didn't say that I had no friends after 20 years. That was a misinterpretation. (How do you think I got as far as I did in the first place?) But this dude probably has an MFA and probably doesn't like that some people are hating on the degree.


Here's another less personal one:

"LROD is the Mobius strip of blogs. Just when you start to think you're heading in a new and interesting direction, you end up where you started. I'll check back in two or three months when the whole MFA debate returns -- YET AGAIN. But only after a few entries (yawn) on VQR, Narrative, and Darrin Strauss."
My response to this comment is that I...I....zzzzzzzzzzzzzzzzzzzz.

Posted by Writer, Rejected at 8:00 AM

I'm new to this blog, but I have to say it does seem to go in circles. For those of you who find that good fiction is shut out of the literary establishment: do you subscribe to the literary magazines (paying or non-paying) that publish the kind of fiction you like? How many literary magazines do you subscribe to? Do you buy subscriptions to those magazines for your friends and relatives on birthdays and gift-giving holidays? Because if that magazine, and other magazines, start turning profits (and so many don't), they might start paying writers like you. And other literary start-ups might see that there is a paying audience for that kind of fiction.

If there really isn't any lit mag that publishes the kind of fiction you like - if the hundreds of lit mags out there are all looking for the same MFA fiction - why not start one? The beauty of the internet is that you can "publish" with very little overhead (for instance, on this very blog).