The House on Oyster Creek by Heidi Jon Schmidt 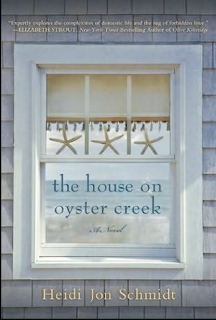 I'm pleased as punch to introduce Heidi Jon Schmidt's The House on Oyster Creek, which is available today. You'll see from the interview below that even the most successful author must temper expectations, face loneliness, and sometimes dream of other careers, while working through the darkness. Schmidt also offers some sage advice on our very favorite topic.

You've written several praiseworthy books--two short story collections and now two novels. As a famous author, have you come to feel less sensitive to the inevitable rejections that accompany this business of publishing books? Haha, oh yes I love rejections! Well…no. If you set out to write something original, it means you’re going against the grain: you’re not giving people what they expect, and they’re not going to recognize your amazing brilliance right away. But that dream of unconditional love persists, no matter how often you remind yourself not to expect unconditional love from a multi-national publishing conglomerate.

When did you start working on The House on Oyster Creek? What was your inspiration for the novel? The night before Thanksgiving, maybe six years ago, I went out with a friend of ours to get some oysters from his claim: there was an immense moon rising and the tide was streaming back in, and it was so beautiful that I was struck by a bolt of feeling such as requires a novel. All kinds of things started to fit into it: the different love stories, the sense of community, the legal battle….but really, I wanted to write about what it feels like to be alive.

Is a second novel more difficult to write than a first? For me the second was easier. I’m older and more comfortable with myself, so I don’t second guess myself as much. Still, it was like swimming across an ocean of thirty-foot waves. I think that’s part of what gives a book life: the reader can feel that the author has really reckoned with something.

Few writers are adept at both stories and novels. Which do you like writing better? Or is it hard to compare? It’s all lonely work. But I always think of a novel as being like a town you might visit in another country—it’s exciting to make up a place with all it’s odd alleys and vistas, and to know it right down to the secrets in the bureau drawers…so for the moment I’d rather write novels.

Is it true that you wrote this novel on a two-book contract? Do those mythical creatures still exist? How does one manage to catch one? Who is your brilliant agent? No, it’s not—I wrote the book without a contract at all, but when I sold it they asked me to write another, and I couldn’t help saying yes. My agent is Jennifer Carlson (Dunow, Carlson, and Lerner), and she is indeed brilliant.

Can you say what your next book is about? Did you already have the idea for the second novel when you got the two-book contract? Did it make you feel pressured? Relieved? Relieved for about 10 minutes…then pressured. I had meant to take a year off from writing….but I loved the world of Oyster Creek so I’d already started to think about another book that would be set there.

When did you finish a first draft of The House on Oyster Creek? How many revisions did you write? I think the first draft was 2006? Then there were at least five more. It’s all such a strange process—as much blind instinct as intellect.

Who reads your drafts? Agents? Editors? Friends? Lovers? Strangers? I have maybe three friends who are kind enough to slog through, and who know me well enough to have a sense of what I’m trying for, and to want to help me get there. Again, if you’re trying for something unusual you can’t really expect most people to share your vision—so for me it has to be people who love me in all my peculiarity. And there aren’t very many of those!

Despite your success, and wonderful books (I've read many), you must have had an inevitable rejection or two along the way. In your life-long career as a writer, what's your worst rejection? Your best? A.) Thank you, I’m so glad you liked them! B.) When I was 25 a high powered agent called me up and promised me things that only a 25 year old can believe in. He quickly decided that call had been a mistake and went on to talk about the draft I’d sent him behind my back, to a lot of people in New York. It was devastating – but it also forced me back on my own resources and pushed me to grow in my own direction. So it may also have been my best rejection.

Your first book of stories was The Rose Thieves published in 1990, then Darling in 2001; then came your novels, The Bride of Catastrophe in 2003 and now The House on Oyster Creek. From your unique perspective how has the publishing industry changed over the years? (It has definitely gotten more difficult for those of us on the outside looking in. Has it gotten more difficult for you and other established writers you know?) This is a great question—but a huge one. When I was in grad school in the 80’s it was almost impossible to publish a book of short stories. Now, the past two Pulitzer prizes went to collections of short stories (one from a tiny press)—so in some ways it’s become easier. The industry is much smaller and leaner now, and much less likely to take a chance (in the 90’s people were getting six figure contracts based on four page book proposals). I think there’s more room for new writers than known quantities, though—there’s always that hope on the horizon.

Sometimes I think I am lucky to be a writer; other times, cursed. Have you ever (in frustration) wanted to be something else? Bank teller? Cook? Oyster farmer? All day, every day. I wrote this book partly so I could imagine being an oyster farmer. Every time I pass a Help Wanted sign I’m tempted to apply, no matter what the job is. I’d love to work in a fabric store and talk to all the customers about what they’re sewing and why. But somehow just when I’m about to make a break for it and head off toward the unexamined life, I think of something I want to write about, and trudge back to the desk.

Do you have any words of wisdom for LROD readers struggling to get their brilliant tomes in print? “No one knows a masterpiece on sight.” –Ezra Pound. And boy is it true. Every successful author I know has been through times of absolute darkness when it seemed no one gave a damn about their work. If you keep working through that darkness, you may develop into a writer no one can resist, you may find the agent or editor who recognizes what you’re doing and wants to connect you with your readers…or both. And meanwhile, remember that Emily Bronte died soon after Wuthering Heights was published to withering reviews….but her work has lived on and on and on. So you’re in good company.
Posted by Writer, Rejected at 7:12 AM

Hi all-- now I know about this site I may become addicted. My husband got a rejection today-- very nice, said they really liked the story but unable to use it at this time. The only problem? They published the story last year. Now that is a good rejection.

She seems nice. I'm going to check out her books.