What Were You People Thinking? 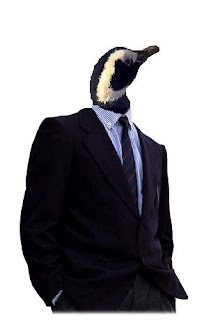 According to the Gawksters, Penguin Books co-hosted a project in which 1,500 people on the Internet attempted to write a novel, but it turned out bad.  The project is called A Million Penguins, which brings to mind my own novel-writing angst times a million and makes my head pop off.  Anyway, the novel has been roundly declared "terrible," which, duh, we could have told you.  Here's an excerpt from the opening paragraph:
"The deep waters, black as ink, began to swell and recede into an uncertain distance. A gray ominous mist obscured the horizon. The ocean expanse seemed to darken in disapproval. Crashing tides sounded groans of agonized discontent. The ocean pulsed with a frightening, vital force. Although hard to imagine, life existed beneath. It's infinite underbelly was teeming with life, a monstrous collection of finned, tentacled, toxic, and slimy parts...."
Blech!  But I guess they didn't spend 10 years of their precious life revising like I did.
Anyway, hey, editors at Penguin: next time you want to publish a high-concept novel, don't waste your time on gimmicks; contact me instead.  I've got a really good literary book waiting for you.  And what could be better than successfully publishing the most rejected writer around?  Seriously.  That's interesting, isn't it?  Okay, never mind.
Posted by Writer, Rejected at 4:28 PM

Email ThisBlogThis!Share to TwitterShare to FacebookShare to Pinterest
Labels the death of fiction

Good try, W,R. But you should really hang up your hat on the old novel. Ten years of revisions and no bites! That's horrible.

I like this blog a lot. I've been reading it all afternoon. Thanks for pointing me to it!

I feel less alone and isn't that one of the best things that writing does?

You're telling me, my friend? And yet, somehow, I still hope. Call me a glutton for punishment. Call me writer.

Hey G4P,
You're so right on. Gimmicks like that are an insult to those of us who have written novels from our hearts and revised them with our sweat.

Don't hang up your hat on the novel.

If *you* don't believe in what you've written, then sure as hell no-one else will. Ever.

In the latest O. Henry Prize collection, one of the stories by a woman named Shannon Cain was rejected TWENTY FOUR times before the New England Review picked it up.

Oh, I believe in my novel all right. It's the publishing industry that seems like a failure to me at the moment.

Hey, WR, don't give up. The publishing industry is at a weird tipping point -- my feeling is things are going to be rather different six months from now.

W,R, don't hang up on it. I'm a 10 year expecting novelist too, and I still believe. Please, keep with it.

"In the latest O. Henry Prize collection, one of the stories by a woman named Shannon Cain was rejected TWENTY FOUR times before the New England Review picked it up."

I'd love to see the submission history on that one. The names of the 24 rejecters. And I wonder who did it, 20 year old interns, the editors themselves, the mailroom guy, who? And do any of them stand by those rejections in the wake of the story's success at NER? That's the kind of thing I'd love to know more about.

Pennguins can't write; they don't live long enough, or well enough - to hard to keep warm, writing. They should have gone with turtles. A Million Voices of the Turtle (see Charles Darwin on how loud and deep those old guys and gals on the islands). As for yr novel 10yrs in the making: do not despair (Salinger took 10 yrs on Catcher); do not presume (Kerouac took like 3 weeks on Road).