Rosellen Brown Cuts to the Chase...Or Does She? 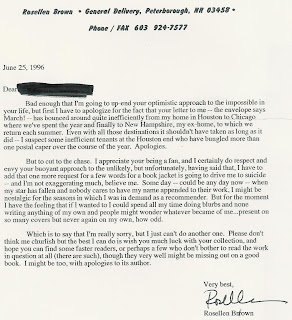 I didn't know Rose Ellen Brown. I just wrote her a fan note, asking if she'd blurb my first book. In her rejection letter, she tries to burst my bubble gently, but can't seem to help from hinting at a sinister blurbing underworld.

She writes: "Bad enough that I'm going to up-end your optimistic approach to the impossible in your life, but first I have to apologize for the fact that your letter to me--the envelope says March!-- has bounced around quite inefficiently from my home in Houston to Chicago where we've spent the year and finally to New Hampshire, my ex-home, to which return each summer. Even with all those destinations it shouldn't have taken as long as it did--I suspect some inefficient tenants at the Houston end who have bungled more than one personal caper over the course of the year. Apologies.
But to cut to the chase. I appreciate your being a fan, and I certainly do respect and envy your buoyant approach to the unlikely, but unfortunately, having said that, I have to add that one more request for a few words for a book jacket is going to drive me to suicide--and I'm not exaggerating much, believe me. Some day -- could be any day now -- when my star has fallen and nobody cares to have my name appended to their work, I might be nostalgic for the seasons in which I was in demand as a recommender. But for the moment I have the feeling that if I wanted to I could spend all my time doing blurbs and none writing anything of my own and people might wonder whatever became of me, present on so many covers but never again on my own, how odd.
Which is to say that I'm really sorry, but I just can't do another. Please don't think me churlish but the best I can do is wish you much luck with your collection, and hope you can find some faster readers, or perhaps a few who don't bother to read the work in question at all (there are such), though they very well might be missing out on a good book. I might be too, with apologies to its author."

In the time it took to write all that, couldn't she just have read one story and given me a blurb?
Posted by Writer, Rejected at 5:15 PM

Rosellen Brown is the hardest working writer I've read, read up on, had read my work, worked with and corresponded with. Don't be a hater.

Lucky you, Anon! But this is really all in good fun. The lady was kind to write such a long note to me, who was a perfect stranger. No hate intended. Just a little teasing.