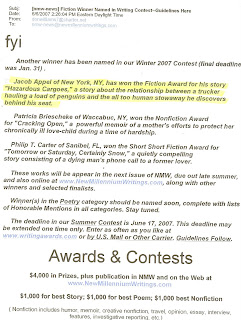 Who is this Jacob Appel? Why does he win everything?
A reader pointed out he has been named in many of these contests, and I found him again this morning on the announcement for the 2007 New Millenium Writings Contest, which I did not win.

Perhaps Jacob Appel will write in and tell us his secret for so much success.
(Speaking of ubiquitous, does anyone else get these incessant emails from Don Williams, who administers the New millenium Writings Contests, which seem to run ALL YEAR LONG.)
Posted by Writer, Rejected at 12:33 PM

I think I found him:

What do I win for my five seconds of sleuthing (thank you, Google!)

I was the guy who brought him up. I'm surprised he hasn't published a book yet, the man obviously has finger on the pulse.

Thanks, Quoibella. His stories are actually on-line just by googling Jacob M. Appel and you can see for yourself why he is a winner. I was surprised, though, that he entered contests with already-published work. The New Millenium entry had already been published in another journal. I didn't know you could do that.

And yes, Don Williams is relentless, although maybe we'll get a reprieve because his e-mail sent today announces his new blog. That's essentially what he's been doing in the mistaken form of e-mail abuse. Sometimes it takes a awhile for an artist in any field to find his best medium.

Two points: (1) Jacob Appel is a really good writer -- or at least his stories appeal to me -- and (2) He doesn't win every competition he enters. Last year, both he and I entered the St Louis Short Story Competition and we both lost. But I figured at least I was in good company.

I'm betting that Mr Appel enters a lot of competitions. And I'm also betting he's had rejections like we can't even imagine -- and a skin as tough as Naugehyde.

Ah, see, to me . . . this very statement gets at that black hole which always sets at the periphery of literary magazines/contests/etc.

Who is Jacob Appel? Indeed, who is he? I'm sure he's an excellent fella. According to the bio on his website, he holds four MAs ( . . . if this were a chess match, I would annotate with '?!', meaning a dubious but interesting move). Four MAs! No wonder he's a great writer. And a Harvard law degree on top of it all. Excellent! We have an industrious gentleman well versed in the art of ivory tower appeasement.

And that is a compliment. He must be a great writer, with all of those prizes and everything, right? And certainly the items on tap, through his website, are crafty productions -- well tooled, well heeled . . .built like a property in the Hamptons. Great stuff. I tip my hat.

Who indeed? I'd never heard of him either. So what does this mean? Who is this Jacob Appel? A star of the small pond called 'the literary journal'? A crowd-pleaser, playing to an elite audience of those-in-the-know? Is that what writing means, really, prizes and accolades? He would say no, I'm sure. Ah, but the online bio reveals all! Like a game of chess, the personality comes out on the board.

I believe that ten years, one hundred years from now, that question will continue. Whereas, if I asked you, or the future generations, 'Who is O. Henry?" -- well the answer will be quick and heartfelt.

Other than prizes and Paris Reviews, the same as anybody else. With such a small readership, with critical reviews from fashion prone editors, what is his writing . . . word games for Americans with leisure time?

I greatly admire his industry, perserverence, and boosterism. I admire, perhaps even envy, the degree of recognition he has earned. Success? I wouldn't go that far. God help us if winning short story contests defines the accomplishment of writing. Of course it's nice. But . . . is anyone reading him, really? Ten years from now? One hundred?

Don't get me wrong: I'm not advocating the Don Brown approach to getting the mega-applause. I'm just always fascinated by something . . . that, in literature, time is a shipwreck in which God looks after his own. (I wish I wrote that, but I nicked it from a Spanish mystery writer).

Please excuse the long-windedness of this message. I have appreciated very much your fortitude in presenting this long list of purple hearts in the form of rejection. Myself, I just ignore them now. But I wanted to clear my own conscience with this post. Kinda like a warmup at the gym, it's got me into the mood to list some weighty words.

what I notice lacking from the bio,
mention of a loving partner, international travel, a loyal pet, passionate hobbies that don't involve sitting at a desk, family, spiritual pursuits.

Shit, seriously, when I or they write my bio I can do without the Harvards and the Minnesota prizes if I can have a few more of the above. I will trade, gladly mes frères.

Y'all are just ridiculous.

Are you all really that petty? $100 bucks says all those naysayers can't write their way out of a box... evident by the shity prose in these complaints. If you can't write a good, clear sentence in a blog comment, you have no business submitting stories to literary magazines.

Jacob Appel is a good writer. Will he be read in 100 years? Who cares. Is he read widely now? This is no better a judge of artistic merit than how many prizes you've won.

Obviously someone likes his work (me too... Creve Coeur is a good story... course you wouldn't know, as half of you have probably never even read more than a few pages from the literary journals you submit to and then bitch when they reject your cliché stories... how can you hope to be original when you don't know what other writers of your time are doing?). Maybe if you spent less time whining about other's accomplishments and more time writing (and submitting?) you'd get published too. Doubtful though. You sound like a lot of sour-grapes wannabes.

But your right, Appel should quit writing, I mean, like, he'll never be O. Henry, so why bother.

Nothing against the OP, he is right, who is this guy that wins everything… but the rest of y’all:
ridiculous.