All The World's A Staged Rejection 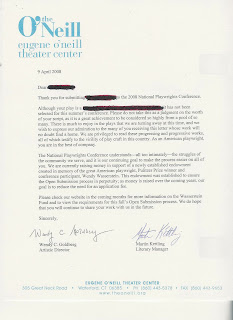 Hey, look!  The playwrights have found us....those poor, poor rejected souls!  (I think writing for the stage is even more of a losing proposition than writing books.  "The theater is dead!" they all.  Maybe so.)  This anonymous playwright seems close to success: the Eugene O'Neill Conference is a huge deal.  I think the rejection is pretty nicely worded.
The anonymous playwright notes that there had formerly been some trouble with the $35.00 submission/reading fee, which is considered high among playwrights, but wasn't bringing in enough dough to keep the Conference solvent.
For a while, the O'Neill Conference organizers proposed eliminating the open admissions policy, allowing only playwrights with an agent to submit, because they wanted to cut down on number of submissions needing to be read to reduce costs.  To raise funds, the O'Neill also dreamed up a little idea to demand a percentage of profits from any play accepted into the conference IN PERPETUITY to ensure an ongoing endowment.  Whew!  That seems steep and a little unfair.
Fortunately, a group of established playwrights thought this was outrageous, and so they circulated a protest letter asking everyone to boycott the O'Neill until the Conference organizers did away with the new proposed policy.  These famous folks (Christopher Durang, Marsha Norman) thought that closing the open admission policy would hinder the success of lesser known talents.  Ultimately, the boycott worked, and the O'Neill rescinded the exclusionary policy.  As noted in this rejection, the O'Neill is starting a fund named after Wendy Wasserstein to keep the project funded without taking money away from struggling playwrights.
It makes it all sound like a supportive cozy club with the famous playwrights helping their own lesser-known comrades.  Sounds nice.
Posted by Writer, Rejected at 11:38 AM

The playwriting community is definitely good about fostering young talent. Chris and Marsha especially have done a lot for the new generation of playwrights. There are a lot of mentoring programs available. Imagine you're a budding horror novelist and you get picked to work one on one with Stephen King for a whole year. It's fantastic. Unlike the lit world, where authors seem to fear the next generation is going to supplant them and take away their book deals, the theatre community is great about reaching out to the up-and-coming.

But make no mistake, it's not all smooth sailing over here. There are fewer opportunities for getting your play produced than there are for getting your novel published. There's only so many theatres, only so many *reputable* theatres, and they only do so many shows a year. A playwright's rejection letter pile may be smaller than that of a short story/novelist, but only because there are fewer places to send our scripts out to. I'd still be willing to bet, though, that percentagewise we have the higher number of rejections on average.

It's really hard to break into the theatre community (especially if you don't have an MFA, degree, or experience in a mentorship program), but the good news is, once you're in you're in. Playwrighting is a good career path for writers who don't love the solitary life of a novelist. You are alone at your computer when you write the play, sure, but you get time off for human interaction when you do readings or have rehearsals and the like. Which makes all of the rejections worthwhile.