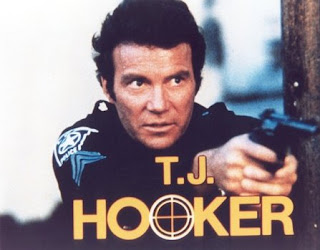 An anonymous reader sent this rejection story in.  It's a good one:
"This happened around 1995 when I just starting to dabble in short stories. I finished a little short story (probably 3-4 pages) about a cop discovering either a murder scene or a scene of domestic abuse (Hell, I don’t remember). If I recall, it was sort of poignant but probably not particularly well written. I wound up submitting it to Caffeine Magazine which I was aware of because it was handed out for free at various coffee houses in LA. The story seems to have made it past the initial reader because when I got the rejection letter back, it actually had (brief) written comments from three judges. One of those judges gave me the funnest rejection I ever received. He wrote (paraphrasing here as I got rid of the original letter 13 years ago): 'Next week’s episode of TJ Hooker?'”
But wait there's more, a side note and some sleuthing:
"The story was later accepted by an Australian Goth Zine called Dark Angel Magazine and actually was a seminal (am I using that word correctly?) moment in my slow-as-a-glacier development as a write.

On and off again for the last decade, I’ve snooped around the internet trying to determine the fate of the editor of Dark Angel magazine. The problem is that I never knew her real name (She went by the moniker “Azriel”) I know that she left the magazine and went to the US to manage a band, but she has left little in the way of traces of her existence.

Caffeine still exists (in virtual form) and you can find a nice description of the original, paper version of the magazine on Rob Cohen’s Linked-In page: (I don’t know Rob in any way, shape or form)."
Posted by Writer, Rejected at 7:41 AM

William Shatner looks so young there. I like him on Boston Legal, where he calls his Alzheimer's "mad cow disease" and experiences buddy love with the adorable James Spader.