So Dark The Night by Cliff Burns 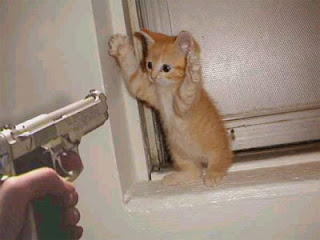 In response to fiery Cliff J. Burns, the Canadian author who couldn't get his latest novel published, and so released it as a free e-book on his website, GalleyCat (those pussies) had this to say, and more: "As we've discussed on Galleycat time and time again, agents have what they're looking for and editors have what they're looking for and it's not always what the public wants to read or the author wants to sell. All authors have met with this frustration, but not many have lashed out as fiercely as Burns."

Mr. Burns does sound bitter (in a good way) and a wee bit angry at women when he uses the c-word (never advisable) to describe editors.  Burns also says, "So when you hear me say what dumb motherfuckers editors are, know this isn't merely a bitter, frustrated writer lashing out; my views are based on nearly a quarter century of dealing with airheads, folks in position of power and influence who possess the I.Q.'s of lower order marsupials."
But since when does G-Cat care about feminism?  I'm pretty sure they just wanted to slap the dude down with this little rant:  "And while your headline ACCORDING TO CANADIAN STANDARDS, I'M A BEST-SELLING AUTHOR!!! Smacks of self importance, the fact that your "site has received over 2500 hits and [your] occult thriller has been downloaded hundreds of times," it is not enough to make you a bestseller. First of all, your book is free so no sales can be reported to the Toronto Star. Second, free downloads don't equal cash sales in the real world, so had it been published there's the possibility that only 25 copies would have been sold in the past month."
My, my, my.  Looks to like someone wants to start a cat fight.
Posted by Writer, Rejected at 4:36 PM

Thank you for this.

Obviously, it's great to have someone offering words of understanding when many others are chucking stones.

You clearly have more experience in the writing and publishing world than those who are criticizing me for DARING to speak out on the vapidity of editors and agents; I suspect these folks are weekend scribblers who dream of being the next J.K. Rowling, while writing over and over again in their journals: "I am a sensitive person no one understands".

I'm indebted to you for taking a different tack. Write on...