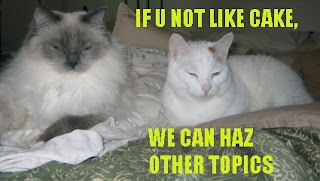 Mediabistro's Galley Cat has been stumping former hot-chick book publicist Sloane Crosley's book of essays  I Was Told There'd Be Cake so much that someone sent in this anonymous complaint: "Enough with the Cake Already,"  which made me laugh. And just to give you an idea about how Sloane crazy they are over there, here are the frenzied posts from the cake-smitten pussies.
Yuck. On so many levels, here.  Just yuck.
Posted by Writer, Rejected at 9:53 PM

Email ThisBlogThis!Share to TwitterShare to FacebookShare to Pinterest
Labels annoying, boring, the death of fiction

Yuck is right. I hate their coverage. They never have anything nice to say about good people, only fawning after the people/ideas/movements they think they're supposed to so that they can impress the people in power. It's gross. I always feel icky after browsing it. But if you want to know what the power elite are pushing, just look at what they praise, the comic books and shallow literary posers.

All controversy about Sloan Crosley aside, I think the book looks like an entertaining read, a la Me Talk Pretty One Day. I think I'm going to get it for my sister for her birthday--she likes this kind of thing. Plus, the book's a PB original...sweet!

I don't know, I used to like GC way back when. I kind of don't like their attitude anymore. They really feel "establishment" these days, mercilessly so.

Go Sloane, Go! Gross little hangers-on Gallleycat are. I can't believe she let them crash her party! Gross. I guess that's what you get for being "world's nicest flak."

Did you notice GC takes comments now? Maybe some of you fiesty LROD mice can go there and let your voice be heard. It sure has been ignored by the likes of GC for far too long.