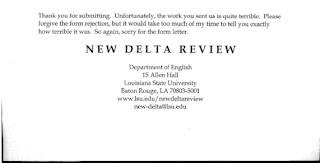 Re: the above rejection from New Delta Review, we have an explanation!  NDR Editor-in-Chief, Benjamin Lowenkron, and Chief-Mischiefmaker, "Assmunch," came around LROD with the following entertaining comments:
new said...
Blogospherites,

Believe it or not, this is the current Editor-in-Chief of NDR, Benjamin Lowenkron. Our journal has a high rate of turn-over on the staff because we are 100% run by graduate students. So, every now and then, an assmunch who thinks he is hilarious happens to stumble onto the staff. I am not sure when or who sent out that rejection (though I have a few ideas), but it is not our practice to insult and antagonize our contributors. Our nornal rejection slip simple informs the writer that their piece did not find a home at NDR.

That being said, I do think the letter is hilarious, and that people take rejections way too seriously (there are an infinite number of reasons a piece gets rejected, and I have plenty of rejections of my own work sitting around my office). Though I would not send this sort of rejection out, I have to admit the thought has crossed my mind on a few occasions - for example, the time we received a letter smeared in cat feces from someone who we rejected (with the normal rejection), informing us that his/her story got picked up by a "better journal." No joke. Anyway, we here at New Delta Review welcome all submissions, and as always, stop idiot be.

the assmunch said...
Not only was it meant as a joke, it was never meant to get out. As the "assmunch" in question (got to love a boss with such careful attention to word choice), I feel somewhat drawn to clear it all up.

We were out of rejection slips a few days back, and (yes, due to the massive turnover) had to search everywhere for the original document which contained the form letter. Once I found it, I amended it slightly as a joke, and saved two versions of the slip (the original, and the joke). Then, one page was printed containing three of the joke slips, and was passed around the office (though not to the EiC).

Apparently, it got mixed up in the pages of actual form letters I printed off that day. For that, I am sorry. I'd like to assure the three people that mistakenly got the joke rejection that it was completely random (as well as accidental), and not indicative of a particularly poor quality of work. Not to say that the stories in question didn't warrant such a harsh reading... I just can't say for sure that they did. Trust me, they accidentally found their way into the pile, and went out in the mail with no one knowing that it had happened.

Not acceptable, certainly, but funny nonetheless.
Posted by Writer, Rejected at 4:22 PM

Actually, I bet this was decidedly unfunny to the people who payed the postage and Xerox costs to make these submissions to NDR.

Glad to see NDR is run with all the professionalism of a frat house. Crossing them off my list.

If those responses are real, it is really getting hilarious now...

It's faintly reminiscent of so many political or corporate scandals where the big boss claims to have no real knowledge of said incident - just a vague idea about who the comic genius might be - while one of his stooges steps forward, 'fesses up and confirms that the big boss knew nothing about it. I guess he was in a meeting while the hilarity was ensuing in the office that afternoon? On a small, grad student-run publication, I wonder how big their "offices" are exactly... The size of a large broom closet perchance? Anyway, totally hilarious. If real. And even if not.

And kudos to WR for getting the story out so fast, it seems! You're swifter with your breaking news exclusives than CNN...

This would be a great set-up for a Law & Order episode, don't you think? Small literary magazine accidentally/sorta-kinda-on-purpose-cause-it's-so-funny sends out nasty rejection slip. Next scene: kinda-funny-but-not-really editor gets hit over the head with a kinda-funny-but-really-heavy typewriter by irrate writer. But who knows who the rejection slip was sent to, because it was so accidental/kinda-funny-but-we're just-graduate-students-so-we-don't-keep-track of-our-rejection-slips. DUHN-DUH!

Not funny in the least. Not professional, not nice, not respectful, not less offensive because of this non-apology/non-excuse.

It's not a question of taking rejections too seriously. It's a matter of finding zero humor in a hurtful act. Grow up.

I think it's pretty hilarious. Yes, alarming for those people. Do they forgive, do they laugh? I guess that's the question. But this is still very funny; if these writers aren't traumatized they should find it funny. Hope they do laugh.
The New Delta didn't mean to hurt anyone. It was just an assmunch incident....postal slapstick, if you will.