I Am Not John McCain! I Am Not Sarah Palin! 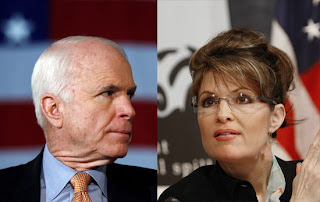 Here's some criticism of LROD from an annoyed reader:
"This site is more and more like a McCain/Palin rally every day. Instead of hearing about Bill Ayers, we hear about Narrative Magazine. And like the person who shouts out something inflammatory at the rally, we get the yahoo above insulting the looks of someone whose photo you post (an invitation to the yahoos, I might add, since we all know how the Darin Strauss photo episode went down). Well, it's ugly and counterproductive. (Oh, and as for Ploughshares...I find it odd that they care "only about the writing" since each issue has a different editor. Hm. I wonder how that works.) I take it that Writer, Rejected isn't a Republican, but I wouldn't be suprised if a photo surfaced of him/her shooting editors from a helicopter. (I await Writer, Rejected's 4-star quip: "I guess you told me" or some such clever comeback. Or, more likely, this will prompt Writer, Rejected to write a post about this comment, because, A) it's the perfect opportunity to play the victim card, and B) it lends itself to good art.)"

I actually think the comment may be fairly accurate, except for the violence from helicopter part, and the b.s. about Bill Ayers, which no one cares about anyway. Oh, and yes, I think I will use it as a post and play the victim card: why the hell not, right?  So, what Dude doesn't get is that I'm on a hundred paid work deadlines these days (thank God), just finished a movie script revision for the producers who optioned my story, and am trying to get my radically revised novel to an interested editor by November (got an extension due to her schedule not mine). No time to be clever, I guess....but I am dedicated to the blog, while I try to get it all done. (Just think of the juicy rejections my current work will create!)
Excuses aside, let's give LROD a letter grade (as if we were in school for our MFA). Question of the Month: What grade would you give this blog? A, B, C, or D.  Do you think my blog work is slipping?  Should I hang up?
Posted by Writer, Rejected at 8:21 AM

Email ThisBlogThis!Share to TwitterShare to FacebookShare to Pinterest
Labels annoying, question of the month

By the way..I'm voting for Ralph Nader hahahahah

Don't quit! It's always fun and lively and thoughtful and a bit meanish here. I love this blog.

Rejection Queen: If you vote for Ralph Nader I'm going to have go over there and personally kick your avatar's ass.

B-. but the fact that the blog is slipping in quality since you are getting more real work is a good thing. congratulations!


(maybe your angry commenters (or really just the one) make his/her own blog if he/she has so much against this one. you're not obligated to do anything here! what a crybaby. and btw, pshares may have a diff ed every issue, but Everything from the slush is passed through the sieve of staff readers, so they do have some consistency in style, although what style exactly is another debate.)

It's a blog. The bar is not that high. If you find it tedious, go away and read something else.

A grade? I come here every day. Mostly, you make me laugh.

Good luck with all that work, WR. It sounds exciting and I hope it goes well.

As a writer, I always relate to the underdogs that don't give up, that are ridiculed for hoping and dreaming and being "unrealistic".

I understand completely not voting for Ralph Nader, especially if you live in a swing state. But I'm always surprised by the hostility.

Violent anti-Nader rhetoric is incredibly misguided, destructive, and ignorant. You ought to be ashamed of yourself.

Please watch AN UNREASONABLE MAN, the documentary about him, and see if you still want to kick the asses of Nader supporters.

Also, if you're blaming Nader for the Bush years, please search on-line for the classic FALLACY OF SINGLE-CAUSE. Though Nader was a contibuting factor to Gore's loss, it's irrational to say he was THE CAUSE when there were so many more significant factors at work that you don't rant about. I don't hear people bash the Supreme Court recount decision nearly as much as they bash Nader. The dreaming underdog is just easier to blame.

A on the blog, and yay for the excellent reasons you're distracted lately. Good luck with all those writing projects, W,R.

Sarah McPalin says the Narrative Magazine people hatched the evil plan for their stupid magazine in the living room of that washed up terrorist John Lewis -- no, wait, Joe Jackson, uh, Jesse James, Jesse JACKSON, no, whatever, one of those Blacks, like, a hundred years ago, not that anyone cares about that, but there's FICTION there in that periodical and why won't anyone be truthy about it and connect the dots, goshdarnit? Then she blew off follow-up questions and boarded the Piper for a little target practice. So -- I'm confused, but I think... I think I'm supposed to send a donation to Narrative Magazine...or maybe Ted Stevens?

Good luck with everything that's going on, W,R! Sounds exciting.

I voted for Nader twice. And I will STILL kick her avatar's ass. This is NOT the year to be nit-picking a Democrat's liberal cred and throwing your idealist ass's vote away.

And: W,R -- I have a really, really good feeling about you. Your time is nigh... will you tell us who you really are, when it happens??

I agree with bloglily.com. I read it nearly daily as well.

This is an A grade blog, the main reasons being: quality posts (often generating interesting discussions) and ongoing-ness. Most bloggers drop off after a few months (a year tops?) so it's refreshing to have a blog that's at home most days of the week so you can drop by.

In terms of anonymity, I say stick with it, W, R. I've seen the identity of some great bloggers revealed and it turns the whole blog into a celebrity-fest, which equals boring. The quality of comments inevitably turns into something along the lines of "hey [Jane/John Citizen], you suck, love your boobs/nob". Roight.

Leave it to the audience to find your other works online, in bookstores, in the cinema, etc. You have a distinctive style. If they're attentive readers they'll find you eventually.

This blog is great. A+. Don't give it up please.

Straight A all da way.

This is Literary Rejections on display and recently all that has been displayed are ghosts of presidents past and future and a tin can worth of dog shit.

Dude of the B-: So send me some of *your* rejections! As it happens I'm fresh out and so I have to fill in with other material...I mean, I can only give you a few hundred and after that they start dribbling in.

I'd give you a solid A. Struggling writers need a virtual watercooler to gather around so they can bitch about those snooty publishing types who work down the hall.

I'm relatively new to the embittered life of a struggling writer. I've probably gotten under 30 rejections so far (and 1 acceptance), but if you're willing to listen to my advice, I'll tell you what I'd like to hear more of from the old hats gathered around the cooler:

1) More writer interviews. You've done a few and they've all been good. Maybe the negativity the writers get bombarded with is a deterent to more of them dropping by, but the snarky discussions afterwards are always funny as hell.

2) More scuttlebutt about what kinds of stories certain magazines really publish. Since I'm fairly new at this, I'd love to hear more discussions like the one a few posts ago when someone said Ploughshares cares more about virtuoso writing than plot. Yeah, I know I'm supposed to go read a dozen back issues of every magazine I submit to, but I don't have that kind of cash or time. People who have had their stories rejected by magazines that supposedly publish a wide range of stories might want to dish on what stories they think the magazine really focuses on.

3. More calling out of bad stories. I know we're all supposed to be supportive of other writers and so on, but since this is just a bitchy watercooler conversation, I'd like to hear more famous magazines called out for publishing really dreadful stories. I think struggling writers will often read a magazine that has rejected them and think, "Okay, my story obviously fell short, but the writers that beat me out might be able to teach me a thing or two. Oh my God, they published this pile of word turds? This reads like one of my rough drafts from five years ago when I had no clue how to finish a story." IMO, it keeps magazines a little bit honest to call them out on the poor writing they sometimes publish.

Thanks for listening to my suggestions, but overall, this is a really entertaining blog. Keep it up.

Fair enough. I'll send my latest rejection as soon as it comes in (and it was promised a month ago).

For the record, it was a B slash B-. I mean, if you're that bent about grades, don't turn in dog shit.

and I agree with native.