It's My Blog, Darn Tootin'! 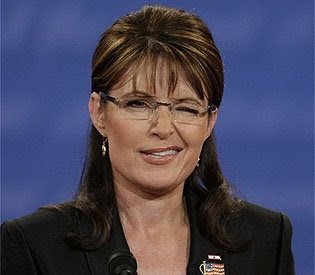 Seems like we've got bigger fish to fry these days than just getting our manuscripts published. For instance, the entire U.S. economy is about to tank and bring the world with it, as has been predicted for years.  Not to mention that Lady Alaska was prepped to the hilt for the debate last night, but didn't even come close.  A sad, sad joke...on all of us (on women in particular).
The only good news in sight is that John McCain is showing his erratic, irrational, angrily unreliable self, which is allowing Obama to pull ahead calmly and graciously in the polls.  How nice it would be to have an intelligent, thoughtful, well-spoken, diplomatic leader in the White House! And wouldn't it be novel if things actually played out according to the candidate's true personalities and ideologies, rather than whatever black magic can be produced to fool the American public? (McCain tells rape jokes!) And, truly, wouldn't it be sweet to have an era in American history during which we could actually tell what the hell is going on? That would indeed be refreshing.
The other good news is that my novel revision is coming along swimmingly.  The retreat I went on really got it jump started. I know that there have been some complaints that my blogging hasn't been as scintillating as usual, and I do apologize. But as the pretty lady says, it's a "Joe Six-Pack kind of America."  So toughen up and grow your own blogs.  Isn't that what this great land is made of? You betcha' it is.
Posted by Writer, Rejected at 10:38 AM

Please keep it up! I think your blog continues to be as gosh darn good as clean coal or safe nucular energy. I guess eight years of hearing it pronounced "nucular" by Dubya has made everyone immune - I didn't hear a single pundit comment on THAT little gaff.

Anyway yes, let's hope those undereducated folksy Main Street crazies don't get in. The fact that even forty voters (let alone 42%) think that The Soccer Mom would make a good president should The Ancient Maverick suddenly kick the bucket (apparently a 1 in 3 probability in the next three years given his medical history and age) scares the heck out of me.

Oh, hey there, Writer-Rejected, I think yer blog is super (*wink) but if it were up to me, darn tootin', I might have to--well, because of taxes, you know, and Barack Obiden, and the white surrender flags there, and so forth...tolerance, of course, because that's what Americans deserve. And that's what John McCain and I will do. A team of Mavericks, because Alaska, the great state of, which is like a microchasm of America, you betcha, can look right out and see America. So I know, and Todd and I both know, that Americans are hungry for change.

Goll-dernit and garsh-dangit, the poor people up there in Alaska, they must be, ya know, also as well kinda freaked out that, gee willikers, their whole state has become the butt of those who would seek to make 'em the biggest national joke since, I dunno, I'm not one of those Warshin'ton insiders, I'm just a little ol' mavericky mommy, since, like, hey, shout-out and go ta bed already, you third graders, since, what was I sayin', since we let a *wink* black dude on the ticket with the ticket.

Now, see, I typed that faster than I thought it. Too easy.

It was rather interesting for me to read the blog. Thank you for it. I like such themes and anything that is connected to them. I would like to read more soon.