No Use Quitting Now 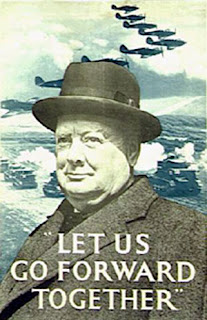 Here's a little wisdom for all you rejected writers out there. It's from Winston Churchill, who knows a little something about war:

"If you are going through hell, keep going."

Posted by Writer, Rejected at 7:07 AM

Ok, I'll take him up on this logic. I'm striking out on where to send my stories, so I thought I'd see what things were like back when Churchill was Chancellor of the Exchequer, and compare to now...

Here's a classic story from the time by a famous author: "The Camel's Back" by F. Scott Fitzgerald.

(There's an automated inflation calculator at the gubmint's CPI page.)

The circulation of the Post was about about three million a week in 1920, and according to here it was not only one of the most popular magazines in the US but it was also popular abroad, so publishing in it would definitely make you a world-famous writer.

Ok. We wonder why there are no great American authors today, no authors comparable to Scott Fitzgerald in talent and stature and in the public mind. But let's figure out what magazine today in 2008 (print or web) pays 63 cents a word for fiction and would buy a very readable and entertaining (yet still "literary") 9,000 word short story with not a single vulgarity in it, with a traditional voice, a love theme and even a "corny" ending, and pay a sum of $5,670.00 US dollars (2008) for it?

Editors who are reading this: would you pay 63 cents a word for a 9,000 word story like this? Would you want a writer like this in your magazine? Sorry, Willesden Review, you'd reject this story outright on about ten different "principles", including the many misspellings in Fitzgerald's original draft. Who else. Anyone? David Granger, I know you're looking -- would you buy this, or let Tom buy it? Stacy Morrison, would you consider this for Redbook? Anna Wintour, take off the sunglasses and look: would you buy this for Vogue? Mr. Curtis, I know you have good taste and in real life you're quite a fine fellow, but please: 63 cents a word, 9,000 words and none of them cursings, The Atlantic's summer reading issue, does it add up? I'm looking for readership of millions, here and abroad, and my first guess is The New York Times -- Sam Sifton, you listening? Got room for 9,000 words of good, clean fiction in that culture section of yours?

Then who would do it? And if not, why? Editors, it's up to you -- what the dickens is stopping you?

Yes, Churchill, I'm shoulder-deep in Hell right now. Do I keep going? Where? What to do?

Damn, anonymous stranger with the beautiful brain. I think I love you. Are you sure you don't want to leave your name? With this kind of brilliant thinking, someone surely should want to represent and publish you. I'm going to post your comment as a feature. Thank you. And peace be with you.

Thanks more than you realize. Or actually you do realize, I'm sure. I just wish you were an agent -- or a publisher. I've been rejected by just about everyone, although a couple famous writers did give me some great comments and encouragement. Just no referrals. I also have a shipping crate of unpublished manuscripts including a polished novel that was seen in whole or part or query by 137 agents in the past year. Several of those who read it had some flattering things to say, but it remains, like all my fiction and important work, totally rejected.

Where have you gone, WR? NPP! Even the comments aren't updating. In withdrawal.