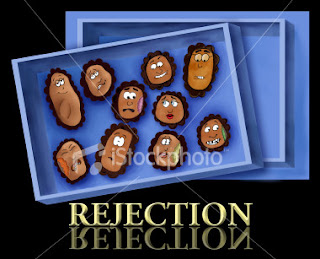 Wow, that "Becoming Somebody" blogger put his/her stories on line, and then expected someone to publish them. Um, that's not going to happen. Plus, they're pretty terrible.

Regarding the commment above.
Kind of what I'm proposing to do, under your aegis.
Rejected, I have a comment on your "Agent Rachelle Gardner Rants and Raves Here" post (it's #17, the last) which contains a question for you.

Yeah, it's pretty true that the publishing industry has and mainstains and insists upon a standard left/liberal political-religious-world view. But there are a few agents and many publishers who will publish right/conservative material. The real scandal however is that views outside of this right-left / lib-con perspective are totally taboo and totally marginalized.

Also, I'm speaking about nonfiction in the above. I don't know ANY journals that would print fiction that comes from a conservative or "right-wing" writer. For poetry, you're limited to The New Criterion, The New Republic, and ... and ... ???
I guess you're pretty limited then.

The left says it loves "choice" but that seems confined to abortion. Schools of choice? Naw. Health insurance of choice? Not if Hillary gets her way. Political view of choice? Obviously not in print.

I've come to the conclusion that libs really hate freedom.

Seriously, I really do think libs are not truly lovers of freedom. Regarding Freedom of Speech, they want to stifle dissenting voices from being heard.

They reject written pieces that don't reflect the liberal mindset and they even want to revive the Fairness Doctrine and keep tight control over the airwaves as well in order to stifle the conservative voice on the radio.

In other areas, the libs keep the pattern going. Look at Hillary, she wants to garnish people's earnings to support nationalized health control! She wants to "take" profits from companies, too, in order to support govt programs. Folks, that's not freedom, that's fascism.

Wait a second, Gumby. Let's take a moment to look at all the rights that little power-mongering dweeb of yours in the White House has dismantled for his war and his pleasure. That's fascism, honey. Not Clinton's health care plan, which only aims to do something about the DISASTER Bush has gotten us into with all the defunding and dissolving he's done of our infrastructure in order to fight his phony war. Don't come around here pushing your irrelevant B.S. about anybody in this country hating freedom. It's stupid and we've got bigger fish to fry.

And BTW...I'm a middle-of-the-road Republican, in case you think I'm a liberal defending a Clinton. Becuase I'm not. I'm voting for Romney today, but it's other conservatives like you who make me ashamed.

Um....I agree with a lot of what you say, anonymous above me. But, hello? Mitt Romney? If you're middle of the road, I think you are casting a misguided ballot. Not that I mind. I hope it's Romney who wins the primary because than any Dem who manages to muscle into the race will likely whip his butt in the election.

As for freedom-hating Americans; I agree with you that this kind of name calling holds little appeal or intelligence.

Let's raise the discussion back to how sad we are for being rejected from the literary world; at least our whining makes sense. :-)

W,R, the anon above you was the name-caller -- just look at that unkind post of his. Now go back and be fair and read the two posts of that non-liberal above. Try to read like an editor, a proofreader, and read for the structure and not the ideas. He disagreed completely with your political-religious-cultural-world view, but you have to admit that he was polite about it. He didn't call you or anyone else names, get nasty, or be condescending. Now read the post by the anon right above yours. Don't think about the ideas but look at the structure and see how unkind that person is being there.

I think it's a pretty good argument made up above that the doctrine of liberalism is against freedom -- (like how "multiculturalism" is supposed to be so great as a thing in itself, all inclusive and "loving" - but only so long as certain cultures are excluded or take the back seat, and only that it's applied in certain countries and not others; it's a kind of hatred, actually). Whether all this criticism of liberalism is completely true or false and unfounded or in between or crazy and stupid is not what I'm saying; I'm saying that it's a really good and interesting argument from a point of view that is totally underrepresented and is a total minority in the media. You don't read about these topics in the literary journals or the (liberal) press.
You sure won't get to read fiction where non-liberals or critics of liberalism are the heros and happy protagonists. Liberalism disallows this other point of view to the point where the very discussion of such ideas are forbidden.


I get the impression that you're a supporter of all that liberal multi-culti stuff, so my suggestion is to try hard and keep the whole political-religious-cultural worldview stuff out of this blog, since us writers and literary types are not all liberals, even if the vast majority are. That means not addressing the whole "literary journals are entirely liberal and push the multi-culti PC agenda" trope, which I believe is important and worth discussing, so that means a whole avenue of rejection will go unexplored on this blog. But if that means keeping the peace here and not dividing the mice or having a contingent of them fleeing for better cheese, I guess it must be.