We Are Not The Only Ones 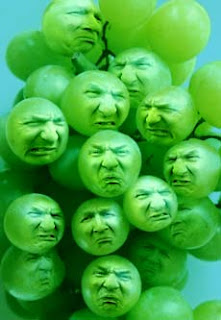 There's a hot debate here lately about whether LROD writers are just a bunch of sour grapes and whiners who are not ready for publishing because we don't polish up their prose, or whether we are genuine writers with a legitimate beef about current business practices. A very funny article over at The Chronicle Review (by way of Helen Ginger's blog, Straight from Hel) seems indicate the latter may indeed be the case. The article by established author and professor, Gina Barreca is entitled "Growing Literary Agents from Stem Cells."

Here's a tart little taste for you: "Maybe it’s not impossible to get an agent who is responsive, responsible, intelligent, well-read, witty, and competent, even if you’re not selling a book that will immediately be made into a blockbuster Hollywood film. And maybe it’s not impossible for me to flap my arms and circle the moon. Ask any writers — working authors, especially those known as “midlist,” meaning that they’ve sold books but have not had action-figures based on their characters — about their search for the perfect literary representative, and they will clutch you by the collar and, as their eyes narrow into gimlets, they’ll launch into a saga that makes the “Rime of the Ancient Mariner” sound positively catchy."

It's well worth the click and the read.
Posted by Writer, Rejected at 2:36 PM

the top one is definitely me.

We're all three on the right. Triplets.

Isn't the second to the bottom you? Sure looks like you?

Absolutely none of them resemble me.

I guess I'm sort of torn. Over the years I've met a lot of agents I like (from 2003 to 2005 I was Executive Director of the Writers' League of Texas and our annual conference was called Agents, Agents, Agents, & Editors Too! I was the one who called and invited agents, worked with them on logistics, etc.). On the other hand, in the post I wrote, I used myself as an example. I was the one who found out she no longer had an agent by going to his website and discovering he had decided to only rep nonfiction -- he just didn't bother to tell his fiction clients. Like every other writer, I've got a stack of rejection letters, although I've packed them away.

That's just plain creepy. If you ever unearth your rejections, we'd love to post them here.

I'm not sure if the green blobs remind me more of anonymous writers struggled to gain recognition for their work or the oft-unappreciated agents who read their work evenings and on weekends to try to find the next great American talent.

Hmmm. I do like bubbles, though. Somehow they are soothing.

Hi Green Eileen: I think they are supposed to be grapes with sour faces....get it? Sour grapes. That's me, or so I'm told.