For The May Queen by Kate Evans 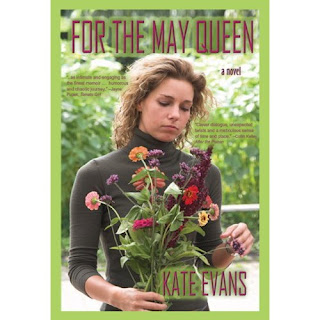 One of our very own LROD mice, Kate Evans, has published her book For the May Queen and has an interesting victory story to tell:
When did you start writing the book? About 5 years ago.

How long did it take to finish the first draft? 3 months.

How many revisions did you write? Probably six or seven. One of the revisions was major; I added a whole new chapter. The others were like smoothing out the sheets while you make the bed.

Who read your drafts? I first began writing it in a writing group run by the poet Ellen Bass. I came with new chapters for several weeks and read them aloud to the group. Their laughter and comments spurred me on. When I had to leave the group, I read chapters aloud to my partner, Annie, as I wrote them. Three writer friends read the entire final draft, as did my sisters and my mom, who is also a writer.
Later I had an agent who read it. He's the one who wanted me to add another chapter. He said the book needed a denouement. After being exasperated for a day or two, I realized he was right. The addition made the book much better. And I had fun writing that chapter, which is the second-to-last chapter. It helped me learn new things about the main character and her fate.

Did you use an agent?/How long did it take to find a publisher? My agent took me on based on my collection of stories and a few chapters of the novel. No one showed interest in the stories, but two editors from major publishers loved the novel and wanted it. They were shot down, however, by their "groups," which are composed of other editors and PR people, apparently.
One of the PR people said he couldn't sell the book because it walked the line between an adult novel and a young adult novel. Right around that time, Curtis Sittenfeld's novel Prep hit the bestseller lists. Prep is a cross-over hit between, yes, adult and young adult. In fact, in bookstores and libraries, I've seen Prep shelved in both areas (same with Catcher in the Rye). My agent and I were frustrated. He worked hard on my behalf, and we got a lot of great feedback on my writing, but no one took the book.
The agent and I parted ways. His agency dissolved and he left Manhattan. He now is in the business of kitchenware retail.
I sent out the manuscript to a number of small presses on my own and received, I don't know, maybe ten rejections. However, one press took it, and I was thrilled. I worked with them for a few months and then, suddenly, they folded and returned the manuscript to me.
During this time, I wrote another novel and a memoir--and I started a third novel. For the May Queen was languishing on my hard drive, and I just figured that would be the case forever. I tried not to care, but it broke my heart because I loved the characters and knew that everyone who read it did too.
Then one day, I saw a book on Amazon published by Vanilla Heart. I'd never heard of them, so I looked them up and then sent them my manuscript. I didn't expect much. But in just a few weeks I heard back from them that they wanted to book. Honestly, I was skeptical. They were a new outfit, and after all I'd been through, I didn't expect much.
However, Vanilla Heart has been great. Kimberlee Williams, the owner, has kept me up to date on the process the whole way. She's been a perfectionist with the galleys and the overall look of the book. It's a gorgeous, quality product. And Vanilla Heart does all kinds of great things to promote and distribute their books.
After accepting For the May Queen, Kimberlee asked me if I had another manuscript. Because I'd never stopped writing, I had that second novel, Complementary Colors, to send her. I emailed it to her, then the next day she contacted me and said she'd been up all night reading it and loved it. She put a preview of the first five pages of Complementary Colors at the end of For the May Queen. That second novel will come out next year.

Who was the first person you told about the book deal? My partner, Annie. Second was my mom.

Has your philosophy on getting published changed? I know now that this is a supremely subjective business based on the luck of finding the right agent, editor or publisher who connects to your work.

What words of advice would you give to a writer on the journey toward publication? Keep writing. Don't let the business aspect overwhelm your love for your art.  Also, don't discount independent presses. I've probably gotten more attention from Vanilla Heart than I would have from most major publishers.
Posted by Writer, Rejected at 8:23 AM

Congratulations, Kate! All the best to you. And thanks to both of you, Kate and W,R, for an inspiring interview. :)

I love stories like this. It underscores the importance of believing in your own work.

E. here, but I'll be posting as an anonymous jackass, just to spice up this boring-ass blog. Wink!)

What the hell kinds of questions are these? You should have asked "Kate Evans," if that is her real name, why she voted or didn't vote for the bailout that's not a bailout, and why she couldn't name any Supreme Court decisions she agreed with or didn't agree with, and what foundationally her relationship is with "the poet Ellen Bass," and whether she has any non-gay friends who are not her non-gay friends, but who just so happen to be friends who are non-gay, and why she is for raising taxes on middle-class writers whose mortgages are health care -- oh, all about job creation -- MSM censorship gotcha experience leadership Putin youbetcha.

A writer friend rold me that she doesn't like every book she sees in a bookstore so she never expected everyone to like her novel (which is doing exceptionally well by the way).

About a month after my first VHP book was published and being received very nicely, I received an overdue response from a publisher I had sent a query to before contacting VHP - they rejected my manuscript and used rather unkind words why. Oddly enough, some of the reasons for the rejection are exactly some of the reasons I have been receiving praise.

Likes and dislikes are very personal. (btw, your writing style is fantastic)

In the name of fairness, I will answer the opposing counsel's questions:

1. You should have asked "Kate Evans," if that is her real name, why she voted or didn't vote for the bailout that's not a bailout,

ANSWER: You have your facts wrong. I did not vote for the dreck who put Wall Street on welfare. At least not as far as I can remember.

2. and why she couldn't name any Supreme Court decisions she agreed with or didn't agree with,

ANSWER: Because Bush v. Gore wasn't a decision but a coronation.

3. and what foundationally her relationship is with "the poet Ellen Bass,"

ANSWER: Some of my best friends are non-gay. I'm tolerant of them. Very, very tolerant.


5. and why she is for raising taxes on middle-class writers whose mortgages are health care -- oh, all about job creation -- MSM censorship gotcha experience leadership Putin youbetcha.