GOD SAYS NO by James Hannaham 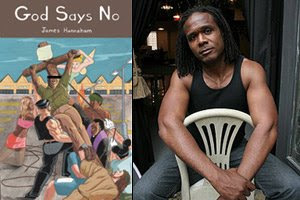 Nothing like seeing a good writer make it into print with an intriguing story.  James Hannaham's first novel, God Says No, is the story of a young black Christian struggling with desire and belief, with his love for his wife, and his appetite for other men, told in a singular, emotional voice. Driven by desperation and religious visions, the path that narrator Gary Gray takes gives a riveting picture of how life can be lived. Perhaps you will like to pick it up in a bookstore, purchase it, and read it, yes?  In the meantime, here's a good victory-over-rejection story:
When did you start writing the book? I started writing what was a very different book in 2001, put it down to write some stories in 2003, picked it up again and revamped it in the middle of graduate school in 2004, finished a draft at the MacDowell Colony in 2005, then continued revising until the manuscript was picked up by McSweeney's in January 2008, and continued to continue to revise until January of 2009. I hope I'm done now.

So, how many revisions is that? By the end, I believe there were something like 29 drafts, some heavier than others, like when I sliced five chapters off the front.

Who read your drafts? Who read my drafts...hahahaha! Who DIDN'T read my drafts? The first version always goes to one of my bestest friends, Clarinda Mac Low, who reads extraordinarily fast and has brilliant judgment. Then it goes to Daniel Clymer (to whom the book is dedicated) who always tells me how much he loves my writing. If Daniel ever told me he didn't like something I'd written, I'd burn it. I had a long list of writer friends take a look after that--Jennifer Egan, Jim Lewis, David Wright, Timothy Murphy, Helen Eisenbach--anybody who I thought could help it along.

Did you use an agent? If not, why not? A shite-tonne of agents read, as Jennifer E. and I attempted to go the normal route to publication for a year or so. I would happily have used an agent, but agents weren't biting, and they all had wildly different opinions about the book, it seemed. So we decided to send it directly to three different small but reputable publishers where Jenny had personal connections—Akasic, McSweeney's, and Picador—thinking we'd get a similar response. But they were all interested, and we had a happy problem on our hands.
How long did it take to find a publisher? Honestly, it took about 2 months to find a publisher, but it had taken a year to fail to find an agent, so I am tempted to count that time as well.
What is your worst rejection story? My worst rejection story is probably about the agent who emailed me raving about the first section of the book before he'd finished reading it and then ended up passing. Or the two agents who represent friends of mine who still haven't gotten back to me.

What is your best rejection story? God Says No is written in a style that purports to be the slightly clunky prose of Gary Gray, a first-time memoirist whose story has very little in common with mine. However, one agent who will remain nameless sent this response to Jenny after reading: "I REALLY wanted to love it. I am sorry to say I didn't. For one thing, I don't feel he has fully made the transition from memoir to novel. His book still reads very much like the former. And there is a naiveté about the writing which comes across as both genuine but also unpolished. I am taking on very few new clients these days and when taking the plunge try to consider the long-term future a writer might have. James Hannaham has a compelling and worthy story to tell, but I am not certain how much more he has to say or if he truly possesses the skills with which to say it." When Jenny informed this person that I wasn't Gary, the agent responded: "I am impressed to hear that this is genuinely a fiction. I suppose the fact that I so completely believed that voice is a triumph of sorts." I remember wishing I could have been this person just so I could have the experience of thinking everything in God Says No actually happened.

Where were you when you received the offer for the book to be published? No place special. Sitting by the windowsill in my apartment where my boyfriend keeps his smelly boxing gloves, getting my email.

Who was the first person you told about the book deal? I just checked my email archive for this, but I knew it'd be Jenny. By that time I was calling her my "agent agent"--you know how they say you need an agent to get an agent? That's what she did for me—and much much more. My nickname for her is Agent 99 (from Get Smart). McSweeney's made an offer via email, after a phone conversation where they'd come close to making an offer, on January 22nd. Minutes later, I emailed Jenny: "Christmas came early, 99."

Has your philosophy on getting published changed? Not significantly. Most of my friends who are writers have an average of three books out already, and I've seen what happens (or doesn't) multiple times, so I never had any illusions about what it might mean. I wasn't thinking it would make me rich or famous or change my life. At the baseline, I bet that it might increase my chances of getting a tenure-track teaching job someday, and I realized I'd be able to point to it and say I'd accomplished something—you can't exactly put an unpublished manuscript on your résumé. As for the roundabout way in which the book got accepted, it makes perfect sense in terms of the way things happen in my life. I try to do things through the accepted channels, I bang my head against the wall thinking I have to, and as soon as I decide to do it weird, it works.

What words of advice would you give to a writer on the journey toward publication? Jenny has said any number of life-changing things to me over the years, especially during the whole process of attempting to find an agent (um, still don't have one, by the way). Here are her greatest hits, as far as I'm concerned:
a) "Give yourself permission to write badly;" b) "The only collateral we have as writers is the quality of our work."

I suppose these are the bookends of the writing process. Think of (a) when drafting and (b) when revising. I don't have all that much advice when it comes to getting published. If you're a young writer and you're more concerned about getting published than you are excited about language and writing and people and the struggle to say something worthwhile before you die, maybe you should be an agent.
Posted by Writer, Rejected at 11:13 AM