Um...No It Could Not 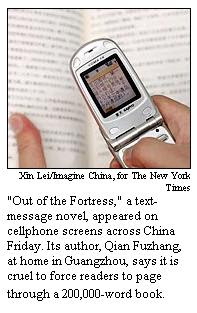 CBSnews in Canada asks the following question: Could the next great novel be written on a cell phone?  I learned so many astonishing things from this article, such as (1) the melodramatic cellphone novel If You by "Rin" is considered a best-seller, even though it features sentences like this one: "I'm short, I'm stupid, I'm not pretty, I'm rubbish, and I've got no dreams."  (2) Another melodramatic cellphone bestseller called Love Sky by Mika was made into a movie, and (3) St. Martin's Press offered a three-"book" deal to a U.S. author Saoirse Redgrave who won a contest and "micro-published" on a website titled textnovel which looks like child's vomit.  I feel educated...and scared.
Posted by Writer, Rejected at 6:40 AM

Email ThisBlogThis!Share to TwitterShare to FacebookShare to Pinterest
Labels strange

I wonder if the fear I feel about "fonespeak" taking over modern English resembles in any way the fear that speakers of Old English felt when Middle English came around with its spelling rules and latinate airs. Perhaps the language is merely evolving. And perhaps I am just a cynical arcane ass because I think this time it's moving toward stupidity. Either way, sux indeed.

Think of it as the new shorthand, or Morse code -- a mode that suits a particular technology, but doesn't work so well elsewhere. I don't think it's going to take over English, because it's less expressive. Languages evolve because the new stuff lets you say things you couldn't before. As far as I can tell, fonespeak lets you say less.

That's CBC news in Canada and I liked that melodramatic sentence. I'm not pretty either.

But are you rubbish?

"I am a sick man.... I am a spiteful man. I am an unattractive man. I believe my liver is diseased. However, I know nothing at all about my disease, and do not know for certain what ails me."

Somehow it comes off as hollow when it's a female teenager steeped in self-hatred versus an exploration of one of the greatest literary anti-hero of all times, but I could be wrong. I haven't read the phone-book, so I don't really know.

"Rubbish" is quite a common slang word in the UK. It's used as an adjective and is usually a bit humorous in tone - e.g. "Your latest posting was a bit rubbish, mate."

Is this supposed to help?

Not really, just trying to tip your balance towards "educated" and away from "sad". Maybe the attempt was a bit rubbish.