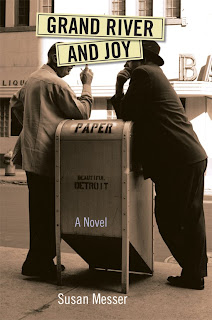 Grand River and Joy, named after a landmark intersection in Detroit, follows Harry Levine through the intersections of his life and the history of his city. It's a work of fiction set in a world that is anything but fictional, a novel about the intersections between races, classes, and religions exploding during the long, hot summers of Detroit in the 1960s. For more information and to buy the book, visit: http://www.press.umich.edu/titleDetailDesc.do?id=364373 or http://www.susanmesser.net/

When did you start writing the book? Grand River and Joy began as a short story—one of the first I wrote in my quest to become a writer. I took the story to a workshop and got some powerful responses, but it never got published, and I began to feel that I hadn’t quite told it “right.” I put it away for many years until one day, I was thrashing about, trying to decide what I wanted to work on next, and I remembered this story. So many years later, I wondered, having grown significantly as a writer, what might I make of it? I changed the narrative structure considerably, introduced new scenes and plot elements, and submitted it to a competition. Around that time, I’d also begun to think that the story had novelistic potential—with all its socioeconomic themes. I’d applied to and been accepted at an artists’ colony, and my plan was to go there to start the novel. That was about four years ago. By the way, the story won first place in the competition, and I was invited to Washington DC, where the competition sponsor was located, for an award celebration and reading. This certainly seemed to validate my intentions.

How long did it take to finish the first draft? It’s hard for me at this point to distinguish between drafts or recall how long any one of them took to write. But at about the two-year mark, I started to think I was ready to look for an agent.

How many revisions did you write? Again, this is hard to quantify. In some ways, I could say it was some almost-infinite number, because some sections, I worked on over and over and over again. In other ways, I could say I had maybe two or three complete drafts. I also had to revise for my editor, once the book was accepted. That last revision was primarily a matter of cutting. I had over 120,000 words in my manuscript, and my contract said I had to bring it down to 100,000.

Who read your drafts? Oh, boy. For years, I was in a writing group, but by the time I began the novel, I had left the group, and I found it difficult to find people whose opinions and reading/critiquing skills I trusted but who had the time to read and respond promptly (promptness is important to me). I was also afraid of being derailed or discouraged, so I was very cautious about who to ask. And I knew my feelings would be hurt, and I would also be mad, if a reader was very slow to respond or didn’t respond at all. I’m amazed when I hear about writers who say they have a whole collection of ready, responsive readers. People I know seem to be too busy.  So . . . the short answer is that not many people read my drafts. My husband read the whole thing (he’s the charming person seated behind me in the Rejection Rhumba intro), and I talked to him a lot about problems I was having and issues I was trying to work through. He was an enormous help. I had two other readers, but they read only the first chapter or two.

Did you use an agent? If not, why not?I did use an agent. And this part of the story was pretty magical. I’d been approached already by three or four agents who had seen my published short stories and essays, but I didn’t yet have a book to show them when they contacted me. I planned on getting in touch with all of them—well, two in particular who were very impressive—when the book was ready, but before I was able to do that, someone else came along. I was at a community Seder, and a woman at the table asked about my book. I said I thought I was just about ready to look for an agent, when another woman at the table said she’d be happy to connect me with her agent. I thanked her but didn’t really believe this was going to happen until a few days later, when her agent actually called, asking if she could read my manuscript. “Sure,” I said. “Why not?” About a week or two later she called to tell me how much she liked it and to offer representation. She seemed to understand the book so well, to really have the feel for what I was up to, and she had the experience to know what to do with it. I felt very comfortable with her in this lengthy conversation, so after sleeping on it for a few days, I said yes to her.

How long did it take to find a publisher? My agent submitted to about 20 editors before she made the sale. She sent it out to 13 the first time. So how long did it take? I can’t remember exactly, maybe six months? Not as long as you might think with 20 rejections. She never even seemed close to giving up, and when she went to conferences, she’d ask colleagues for ideas about where else to submit. I’m very happy with my publisher—University of Michigan Press. This seems like a meaningful home for a book about Detroit.

What is your worst rejection story?  I guess I’ll say that the worst rejection story is the one that brought me to your attention—the basis for my little performance piece called “The Rejection Rhumba.” The rejected piece had garnered multiple honors but never been published, and then that slap in the face. I felt completely humiliated when I opened that letter from the editors. Devastated. Still, I view those who publish literary magazines as angels—all that work for the sheer love of literature. It’s certainly not for the money or fame. But the process can also make people callous.

What is your best rejection story?  I suppose I’ll say that the best rejection was the same as the worst—because of where it led: to a well of playful creativity, to connections with other people, and to your kind invitation to be interviewed.

Where were you when you received the offer for the book to be published? I had just finished working out on the cross-trainer in my basement and was pretty sweaty. My agent had told me a few days earlier that she thought we might receive an offer, but the offer needed the approval of the editorial board, and they were meeting that day. So I was a little prepared for something to happen.

Who was the first person you told about the book deal? I’m sure it was my husband.

Has your philosophy on getting published changed? Not really. It still looks to me like some mix of hard work and luck.

What words of advice would you give to a writer on the journey toward publication? I’ve never been much for giving advice. Most people need to find their way on their own. I can only say what has worked for me, and that has been discipline. I’ve never left it to chance to find writing time. When I decided to get serious about writing, I designated Sunday mornings as my time (see my little essay about this on my website: www.susanmesser.net). And every Sunday morning, I went to my desk, ready to work. I didn’t answer the phone nor let anything else get in the way. When I decided I wanted to write the novel, I added evenings. Every night after supper, I’d get down to my writing. I do regret that I didn’t get serious about writing until relatively late in life. I wish I could have published this novel when I was 30. On the other hand, a person can’t do anything until she’s ready, and I wasn’t ready back then, so . . . this is how it turned out for me. Not so bad after all. I do have more than 300 pages written of a second novel. So I guess one piece of advice is to keep on working, no matter what, if what one wants to do is write.
Posted by Writer, Rejected at 7:15 AM

Wise and wonderful. As someone who also wishes she'd published her first novel at thirty, I like what she says about not doing it till you're ready--and accepting that.